Knowledge about data is spread amongst many people and systems. One of the roles of a metadata repository is to provide a place where this knowledge can be collected and correlated, as automated as possible. To enable different tools and processes to populate the metadata repository we need agreement on what data should be stored and in what format (structures).

The different subject areas of metadata that we need to support for a wide range of metadata management and governance tasks include: 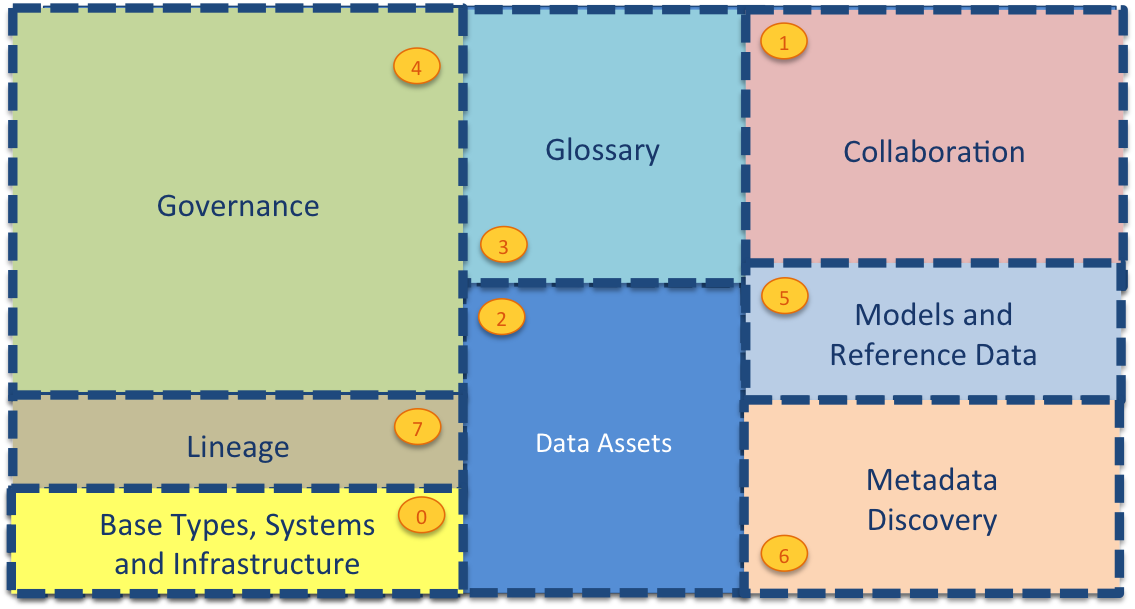 This metadata may be spread across different metadata repositories that each specialize in particular use cases or communities of users.

The following diagram provides more detail of the metadata structures in each area and how they link together:

Within each area, the definitions are broken down into numbered packages to help identify groups of related elements. The numbering system relates to the area that the elements belong to. For example, area 1 has models 0100-0199, area 2 has models 0200-299, etc. Each area's sub-models are dispersed along its range, ensuring there is space to insert additional models in the future.

The diagram above shows a few fragments from the models. Each of the UML classes represents an open metadata type. The stereotype on the UML class in the double angle brackets of entity, relationship and classification defines the category of the type. The line between entities with the big arrow head means "inheritance". A type points to its supertype.

The UML model diagrams show the currently active types. Some types and attributes have been deprecated and these have been removed from the model diagrams. However, there is a description of the deprecated types and which of the active types to use instead. Although the deprecated types can be used (for backwards compatibility) it is always preferable to use the latest types since they are typically more efficient and more consistent than their predecessors.

The properties defined on each open metadata type must be a defined attribute type. There are three choices:

The primitive defined in the open metadata types are:

The collections defined in the opn metadata types are:

The enumerations are defined with the open metadata types for entities, relationships and classifications.